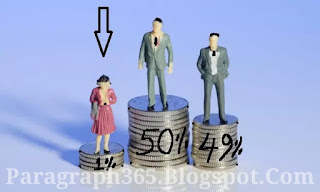 From the time of immemorial past the world is facing Gender discrimination adversely.It manes the disparity between men and women .This kind of discrimination is a serious problem in our male dominated society. Poverty, ignorance and superstation are the reasons for gender discrimination. Generally poor patents take more care for the male children.The parents think that the sons would be able to take care of them in their old age.They believe that the girls are born to do domestic works in their parents and husband's house So the poor patents of Bangladesh prefer their sons to their daughters .Generally the male can do harder works for their physical strength. The females are thought to be inferior. Actually this discrimination has been created by our male dominated society. Social custom and prejudices have degraded women's position in the society. But now, women have proved their worth in agriculture ,mills and factories and even in administration. So we should change our morality atnd try to reduced gender discrimination by raising awareness among people and removing social and political prejudice.

Get Free Email Updates to your Inbox!